Oh, mesi, Bon Dye, one can imagine Ariel Henry, the interim Prime Minister of Haiti, saying this morning. Thank you, Lord… not because Henry likes earthquakes or doesn’t care about the people of his country but because a 7.2 earthquake just off shore—with hundreds of buildings down, and more than 700 counted dead so far and doubtless several thousand more to come, and roads impassable, and a possible tsunami rising, and a tropical storm on the way to create mudslides and more destruction and death—is easier to deal with than the investigation of the July 7 assassination of President Jovenel Moise. The quake also struck on an important day for Haitians: today, August 14, which is the day when a legendary Vaudou ceremony was held at Bois Cayman in 1791, inaugurating Haiti’s world-changing revolution against France. Demonstrations against Henry’s government were planned for today. Cancelled. More for Henry to be thankful for.

Dealing with the limited Haitian judicial system in a highly politicized assassination is difficult and dangerous, and the assassination investigation already shows signs of a probe that will be interminable and probably fruitless.

On the other hand, Haitian governments know how to deal with earthquakes: They invite the international community in.

But the kind of resources that, say, Western European nations have for dealing with natural disasters (the stuff we saw in Germany during their floods, for example) Haitians don’t have, in large part because their state has been stolen from them by nefarious and manipulative businessmen, about ten to twenty of them in this era, who wheel and deal and steal, have taken over almost every important sector of the economy, and have convinced the international community that they are critical to Haiti’s development, when in fact they are among the biggest roadblocks that stand in the way.

Almost all of Haiti’s helicopters, for example, are privately owned by people in this group, and there’s not much money in the national coffer to pay the private sector for the emergency use of these things, the treasury having been massively looted during the previous two administrations of Presidents Michel Martelly and his protegé, the late President Moise. Of course, some of the members of this business mafya, as they are known in Haiti, will come through during an emergency, presenting themselves as patriots and offering things for free. But every favor in Haiti is paid forward down the line.

Another problem for Haitians trying to help each other during the earthquake’s aftermath are the gangs that have taken control of the southern exit of the capital and who thus block all access to the country’s biggest hospitals and best services. Today an ambulance carrying eleven victims was stopped by a gang and turned away from the southern entrance to Port-au-Prince in Martissant, which has been run by gangs for the past two months. Its passengers were held for ransom. Meanwhile major international media outlets had to rent helicopters to avoid the gangs and get out to where the damage is worst.

These street gangs are the leftovers of the Martelly/Moise era, and have been underwritten and armed by members of the mafya and their government cronies; they’re an essential part of the mafya’s business plan.

Soon, the U.S. will be back down in Haiti with a relief and recovery effort, along with Canada and no doubt others, same cast as after the even crueler earthquake of 2010, which struck at a shallower depth under the overcrowded, under-constructed capital of Port-au-Prince and killed an estimated 200,000 plus. This time relief and reconstruction will be run by Samantha Power, administrator of USAID under Biden. Last time it was Bill Clinton who ran the huge American response, under Obama, during which millions of dollars went unaccounted for and Haitians didn’t get much relief. Clinton along with his wife, who was then secretary of state, set the stage for all that has followed in Haiti: they helped certify the questionable elections of both post-earthquake presidents and thus allowed the rise of the corrupt and negligent Martelly-Moise administrations, and their criminal supporters… and the consequent ascension of the angry young shantytown gangs who now control the streets and highways of Haiti.

This morning, President Biden said, “I have authorized an immediate US response and named USAID Administrator Samantha Power as the senior US official to coordinate this effort.” We like to believe that Biden at least discussed this with Henry first, but…  We do know that Power had a good conversation with the Prime Minister after Biden’s announcement.

In any case, we can only hope and pray that Power does a better job than the Clinton duo. The last earthquake came at the end of the two-decade, on-and-off relay of the presidency between the progressive Jean-Bertrand Aristide and his protege René Préval. The questionable 2011 election of Martelly, a hardline right-winger, signaled to Haitians that the era of trying (though perhaps not achieving) real democracy had come to an end, and that the international community was once again willing to put its considerable weight behind Haitian politicians who seemed to have as their primary goal a kind of authoritarian pro-business stability, even if voters didn’t much like them. In the end, during the Martelly/Moise regnum, stability was nowhere on the agenda—no measures were taken to achieve it. 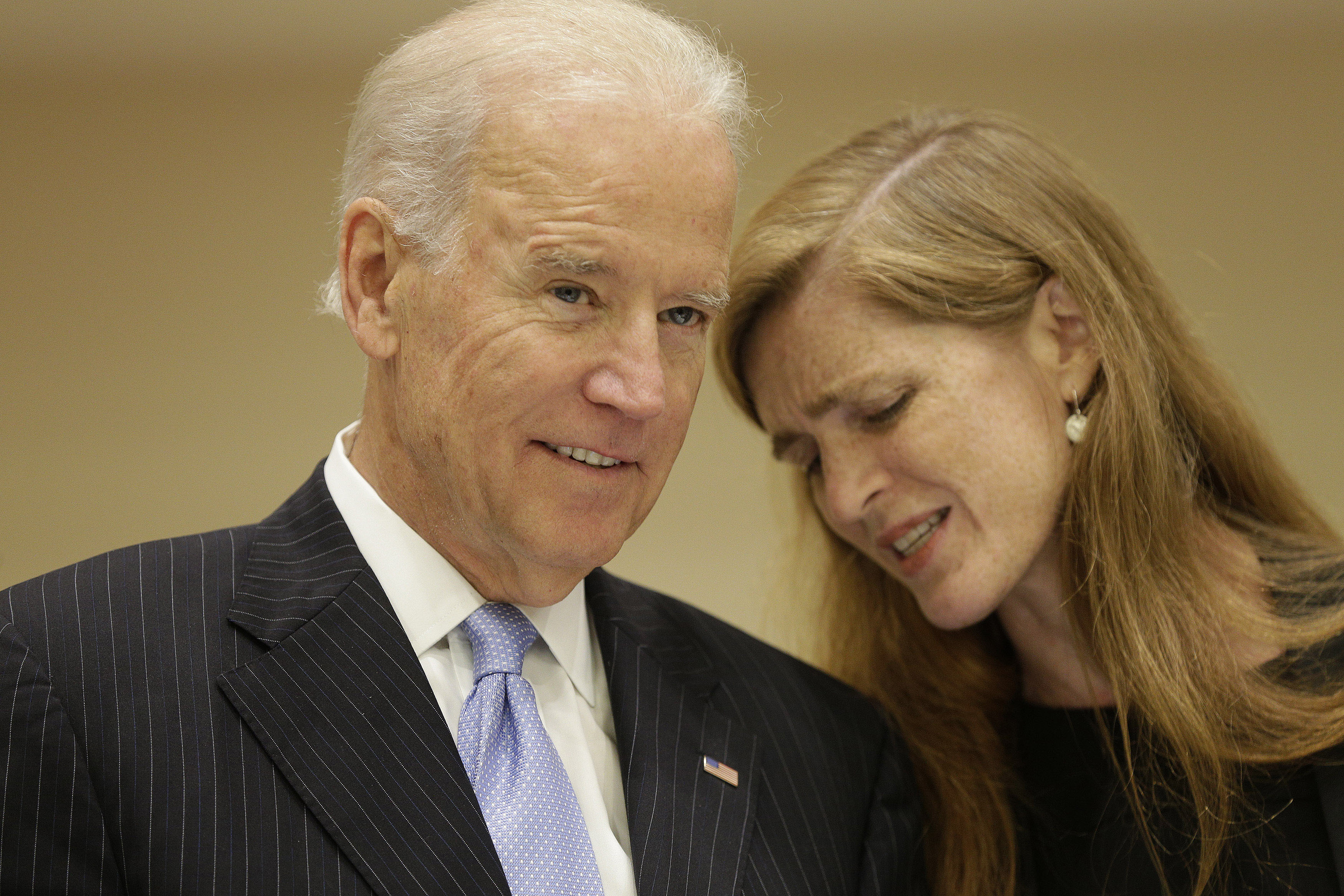 Perhaps this earthquake will lead to a similar and more profound (reverse) changing of the guard. (Hands clasped together in fervent hope…) For the moment though, the Moise assassination has left the same element in charge of Haiti who were in charge when Moise was alive. That single chess piece has been eliminated, but the rest of the team is still in place. Indeed, the earthquake seems to have offered Prime Minister Henry a backdoor to a new U.S. military intervention in Haiti, which is something that was proposed immediately after he took office, with US benediction, in early July. That proposal was rejected by Haitian civil society, and Biden did not warm to it, but with the earthquake, things have changed. Steeples are fallen in the roads, hotels pancaked, schools destroyed… and perhaps Haitian sovereignty, as well.

Anyway, now Henry can work with Power to help Haitians cope with the earthquake, while possibly turning away from the supremely difficult task of naming, arresting, and trying the perpetrators of the Moise assassination. The earthquake is virtually a gift from God for him. Politically, bringing the assassins to justice is almost an impossibility for Henry, who was part and parcel of the governmental apparatus surrounding the late president, and—as Prime Minister—represents in a way the culmination and the continuation of Moise’s rule, his appointment to that position having been Moise’s last act in office, very shortly before Moise was killed.  Henry would be risking… a lot …. if he actually were to hunt down and prosecute the real perpetrators and intellectual authors of the crime. Because, and I will say this only once, the dead president, his friends, and his enemies were all part of the same corrupt group that’s been running Haiti for a decade. Any one of Moise’s cohort could have helped authorize the killing (obviously, there are others to suspect outside of that circle).

Already members of the investigative team looking into the assassination have had to go into hiding because they know or might reveal facts about the crime.  For now, the probe continues, and investigators scratch their collective chin. Who did it? Well, let’s say this: Someone knows.

Will the truth ever be revealed?

Ask the killers of Lebanon’s Rafik Hariri, who was assassinated in a massive explosion on a main street in Beirut in 2005. As Marlise Simons wrote in The New York Times this week, a tribunal established to prosecute the assassins of Hariri failed to show who ordered the attack, or why, after twelve years of investigation and $800 million spent.

That probe is now closed.

Read More about “From the Newsstands”…