There are drones flying over Haiti these days, I was surprised to learn.

What are they doing there, you might want to know  — and so did I, since I had heard nothing about this, and found out about it somewhat fortuitously.

I was looking recently at images on Google generated by a search for the University at Limonade (I’m interested in the University, the industrial plant nearby, and the international precious-metals mining projects in the region), when I stumbled upon this picture (below) of a quartier populaire somewhere in Haiti: 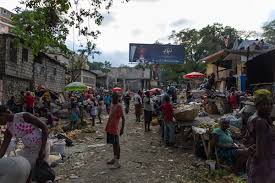 I clicked on the picture, wondering, as usual, where this lively and impoverished spot might be (you can never jump to conclusions based on the search category under which images are displayed on Google). The place in the picture is, according to the caption provided,  nowhere near Limonade, but rather shows the “Millet river bed in south Port-au-Prince.” And the title of the site where the image was generated was Drone Adventure in Haiti. I navigated over to their site, www.droneadventures.org.

As you can see, if you click on that link, Drone Adventures is affiliated with, among others, Open Street Maps and the International Organization for Migration. I wrote about these two groups and their projects for Haiti in my recent book Farewell, Fred Voodoo.

As you probably know if you’ve read this blog before, I’m an old-schooler. I certainly do freak, as old-schoolers would say, about things normal people don’t consider problematic.

In Fred Voodoo, I freaked about Open Street Maps, which, in affiliation with IOM, was sending bright, educated Haitian kids out on motorbikes and bicycles with neat video cameras and other cool and expensive tech equipment to map every inch of Haiti. I was astonished that the best and brightest in this country, where independence and a kind of righteous, protective secrecy have endured since the establishment of the nation in 1804, would be performing intelligence work of the sort that the CIA was infamous for half a century ago.

Here’s part of the passage from Fred Voodoo:

The history behind both the Haitian Revolution at the end of the eighteenth century and the rebellion against the American occupation of Haiti in the first half of the twentieth century is complicated, but one thing can be said of both: the mountains were always the rebels’ friends. Up in these cloudy, cool, green fastnesses, rebellion was planned. This was where the maroons camped out, where slave runaways and anti-imperialist rebels alike lived (at different times, although part of the same ongoing movement) in small, hidden villages, or bouks, in the high hills. During plantation times, such fugitive mountainside communities were common throughout the West Indies and Latin America. The biggest and best-known cliché about Haiti, other than “poorest country in the Western Hemisphere,” is the proverb “dèyè mòn, gen mòn” — “behind the mountains, more mountains — which does indeed just about say it all.

Frankly, the white man, no matter his nationality, did not know the mountains of Haiti and didn’t want to know them. In general, this is still true. For centuries these mountains, which rise up in powerful, majestic ridges one behind the other, sheltered and protected those who fled to their dark forests. Only a few expeditions of colonizers and occupiers have ever been successful in hunting down the Haitian enemy in the mountains. In later times, the twisted corridors, pathways, and cardboard-and-tin-walled alleys of the urban shantytowns provided a similar cover for the regimes’ natural opponents, a place to hide and live for grassroots organizers and popular political movements and frightened opponents of the Duvaliers and other strongmen. You could hide with some ease in the shantytowns. Into these unknown and potentially threatening areas, neither the regime’s nor the American embassy’s reach often extended with any efficiency or regularity.

So I have not been a big supporter of IOM knowing every detail of the Haitian terrain, of — as it were — globalizing the Haitian’s intimate knowledge of his or her own sovereign surroundings.

Anyway, IOM’s rationale for supporting the mapping project, I was told by a very smart, seemingly good-hearted official there, was to have an up-to-date information base that could appropriately and efficiently guide future emergency humanitarian and medical aid into any neighborhood on the island.

But as we all may remember, even though a photographer in a helicopter managed to take a photograph of wretched and abandoned Haitian hurricane victims camped out on rooftops with waters swirling below — a photo that indeed appeared on the front page of the New York Times — help itself lagged far behind the taking of the photo. In other words, everyone knew where the victims were: that wasn’t the problem in delivering aid. The problem was no one in the helping community could get the aid together and delivered fast enough. The aid needed was helicopter transport and food drops; that didn’t happen soon enough in any organized way.

Back to Drone Adventures. (Note: newbie outsider trips to Haiti are often called “adventures” by those who take them. Because it’s so fun and exciting to go to Haiti; and then, you get to leave.) The drones in question are called eBees. They are made by a Swiss company called senseFly, and they are much cuter items than those we normally think of when we hear the word “drone.” These don’t drop bombs, or rain explosives down on questionable targets.

Isn’t that cute? Like a kid’s toy, like a remote-controlled airplane. It’s small, too. Here’s one being held by someone:

As Brian Heater wrote on his engadget blog in January, the eBee is

a GPS-packing foam beast created in collaboration with Sensefly. The eBee can carry a camera (a Canon Powershot, in this case). Shake it to start the motor and then toss it off like a paper airplane. It’s capable of shooting video and doing 3D mapping, and the removable wings mean you can stick it into a carrying case.

Here’s a video of all the fun Haitian mappers can have flying drones over their country:

“Let’s Fly!” That’s what the drone throwers shout as they shake up the baby drones and let ’em rip out over the countryside. The little planes, I have to reiterate, are incredibly cool and amusing and intelligent, and they remind me of Mission Impossible, NASA, J. Edgar Hoover, and The Man From Uncle, to say nothing of (especially) Get Smart. Do I date myself?

By the way, the image of the Millet river-bed community (second photo in this blog) is simply a photo of a community that often floods. And theoretically, if mini-drones map the river bed there, and engineers can figure out how to stop the river bed from flooding based on those maps, and then if the engineers come to Haiti (or possibly, they’ll be Haitian engineers), and are paid and also receive the necessary materials to fix the flooding, and actually then complete the project….. then the eBee drone will have helped those people of Millet, and will justify using their photo on the Drone Adventures page, as if they were direct beneficiaries of this project.

More complaints from this old-schooler: On this initial trip, the mappers mapped only sites near Port-au-Prince or in it, and sites in the north near the new post-earthquake industrial park at Caracol. This shows me that their goals, or the goals of the masterminds behind the mapping, including IOM, are not entirely pure. Port-au-Prince and the north are the two must-sees for the kinds of outsiders who visit Haiti today. (The rest of the country is largely ignored.)

And the north, especially the area around Limonade and Caracol (which is why my original search generated a drone-related picture),  is the investment capital, where American, Dominican, and South Korean and other countries’ firms and mining companies are already setting up shop.

I’m sure the dronesters hope to fly their cool little critters over the whole country, but the fact that this is where they started (where most disaster aid and other kinds of investment have already come into Haiti) is telling.

Here’s the drone enthusiasts recap of what they achieved:

We covered over 45km2 of territory during 6 days of intense mapping in some of the densest urban territory we’ve ever worked in to provide international organizations with the maps they needed to do their jobs. Some examples of the projects using the resulting maps and 3D models spanning 10 different sites include:

Mapping of several dense shantytowns in Port-au-Prince, used to count the number of tents and organize a “door-to-door” census of the population, the first step in identifying aid requirements and organizing more permanent infrastructure.
3D terrain models of some dangerous ravine beds will be used to perform water-flow simulations and decide where to build infrastructure to mitigate flooding.
2D and 3D maps of the brand-new University of Limonade in the north of Haiti to help promote the school for the next generation of youth of Haiti.
All the data that we generated has been made freely available through OpenStreetMap to all the great people we met during this mission, without whom this mission would not have been possible.

I find that last bit amusing: All the data has been made available to “all the great people we met during this mission.” Yes: to all those Haitians on the ground who happen to have access to a computer — from the looks of it, they are very few.

This inveterate pessimist (that’s me) says that she’s sure that senseFly, the maker of the baby drones, will prosper in its original core goals: “We develop, assemble, and market autonomous mini drones and related software solutions for civil professional applications such as mapping of mining sites, quarries, forests, construction sites, crops, etc.”

This inveterate pessimist also says that not one of the humanitarian goals put forward by the dronesters will be achieved through this project (except maybe some nice-looking ads for the university at Limonade).